A Comprehensive Guide to Buying, Making, and Using Bump Keys 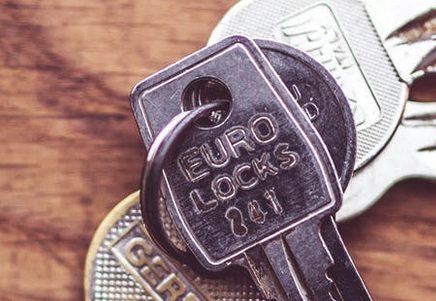 Bump keys are a lesser discussed part of the locksmith toolkit. People like to talk about lock picks because of the movies, and how cool it makes you look when you lift that last pin and pop a lock.

But you can be just as cool by pulling out the right key, sliding it into the slot, and smacking it with a rubber mallet or end of a screwdriver. Like magic, the door is open.

But is it magic? Is it easy? And how do you come across these keys?

We will cover all of that in this comprehensive bump key guide.

What are bump keys?

Bump keys are keys that have been filed to points and used to unlock doors by being slapped with a hard object. The points speed across the key pins, causing a Newton’s Cradle-like effect where the key pins don’t jump, but the driver pins do.

An example of the inside of the lock.

By bumping the key, and forcing this effect, while applying a slight twist to the key, the lock is forced open.

This doesn’t always happen, and there are even some locks that are considered bump-proof.

Incapable of being bumped.

These so-called bump-proof locks use one of two main methods for their claim. They either don’t use the pin and tumbler design of a traditional lock, which completely removes the potential for bumping pins. Or they use oddly shaped pins, which make bumping much more difficult.

Difficult, but not impossible.

If done correctly, there is no visible indicators on the lock itself.

This means if a burglar comes into your customer’s home, they aren’t likely to be able to make a successful claim to their insurance provider. You will be left with an angry customer. And the burglar will win.

Are bump keys legal to make / own?

In most states, bump keys fall under any “burglary tools” legislation, which we’ve covered. To summarize that article, in most states lockpicks are legal unless you have criminal intent. There is some grey area there, such as some states considering the mere possession of lockpicks as criminal intent, but those subtleties you should talk to a lawyer about.

Two states that you need to be aware of, however, are Tennessee and Illinois.

All lock picking tools are illegal in Tennessee unless properly licensed as a locksmith. This includes bump keys, obviously.

In Illinois the waters become a little grey-er.

Illinois actually allows you to own and possess lock picking tools, as long as you do not have any criminal intent. Much like all the other states, if you are found to be in possession of lock picking tools while in the commission of a crime, these tools can be used as evidence to increase the charges against you.

But, then there is bump keys. Bump keys are considered illegal in Illinois, no matter what, unless you are a properly licensed locksmith.

So be careful, there.

There are a ton of different lock makers in the world, but you’re going to come across a few more than others while working “in the wild.” Those are Kwikset, Schlage, Brinks, Master Lock, and Yale.

Why are you going to come across these more than others? Because of Walmart.

And, much like everything else that Walmart sells, these are the bare minimum when it comes to quality.

And every single one of them is vulnerable to bumping.

You’re going to come across four different Kwikset keys: KW1, KW5, KW10, and KW11. There are variations of each of these keys, but the basic idea is that each is able to be used for a different number of pins, and different applications.

For the most part, you will be dealing with KW1 and KW10’s in the wild. KW11 is the same as KW1, except that it has space for 6 notches instead of 5. If you want to limit the size of your key ring, buy a KW11 blank and use it in both KW11 and KW1 slots.

Schlage has a number of different key codes, but they break down to 5 pin and 6 pin variations. You should have at least one of each pin type in your bump key ring.

Yale keys span from 4 pin keys all the way up to 6 pins. They have a wide variety, so you may want to start collecting them early.

Because these 5 (really, 3) locks will end up being your bread and butter, I highly suggest that you pick one of each up and make yourself a practice block to test with. I’ve included the more common keyways in the links above, so you can order yours and start practicing this week.

How to make a bump key

When it comes to actually making a bump key, you have two main options. You can choose to either make the key from a blank, or you can choose to make the bump key from a spare key. The option that you decide to go with really depends on what tools you have available to you.

From a spare key

This is the method that I most suggest. Not only do you know exactly what manufacturer that key is for, you can keep a record of the exact model door lock you pulled it from.

This is also the cheapest way of cutting the key.

First, locate the exact type of key that you have. Once you know that, you will need to do some research on the manufacturer’s website for the depths of their key cuts.

With this information at hand, you’re simply going to take the triangular file and slowly cut the bitting to it’s lowest possible setting.

This will take time, but go slow. If you go too far you risk destroying the key, and making it completely unusable.

Once you have the bitting even across the key, clean off any burrs and test it out. You may want to gently round over any sharp edges to lessen the risk of jamming in the keyway, or damaging the pins.

Plus, rounded edges make the key jump through the lock smoother, which improves the Newton’s cradle effect.

From a key blank

If you’re cutting your bump key from a key blank, you can do it with the same tools as you would a spare key. Though, you will find it difficult to keep your lines straight. This will lead to a perfectly good key blank being wasted.

Instead, it’s best to use a key cutting machine to do your cuts.

Place your key into the cutting machine, and cut the key to the lowest possible setting for that manufacturer. Clean it up like you would any other key cut, and you have yourself a perfectly usable bump key.

Where to buy bump keys

If you don’t have the ability, or desire, to make your own bump keys, I can fully understand. In that case, you can simply order a set of bump keys. There are a number of places to order them online, but I’ve found the least expensive way to be Amazon.

Amazon may be the cheapest route to take, but it’s also a crapshoot if you’re going to get the quality level that would make it worth using in a real-world environment.

How to use bump keys

Now that you have either made or purchased, your bump keys, it’s time to learn how to actually use them.

Before we begin, you’ll need one last tool: the bump hammer.

Some locksmith tool sites sell actual bump hammers, which are designed for this purpose. If you’re interested in those, go right ahead. Personally, I suggest a nice cheap jewelers hammer, so you lower your risk of damaging the key — or your fingers — but you can also use the handle of a screwdriver if you want.

Bumping locks is less about finesse than it is about timing and pressure.

If you apply too much tension before bumping the key, you can keep the pins from moving. If you’re not fast enough, or not applying enough tension, the pins can reset before the cylinder turns.

I find that I get my best results with a consistent strobe pressure.

What I mean by that is, instead of applying constant tension to the key, I place it in the keyway, with my fingers on the edges and out of the way of the hammer.

Then, I twist the key a little, allowing my fingers to basically bounce on the twist. Once you get into a rhythm, you can then use your other hand to bump the key as you begin the twist. This, when done correctly, times the twist perfectly to the pins passing the sheer line.

After nailing down the basics, you may want to improve your technique. This section contains all of the advanced techniques for bumping locks that we find, and will be updated as we hear of anything new.

We highly suggest not attempting these until you have a solid grasp on the basics, though. You may end up confusing yourself with the more advanced techniques, while thinking it’s an issue with the basics.

How to improve your bump key technique with castration rings

Let’s get it out of the way: castration is a word that can hurt any man reading it. On the farm we just call them “bands”, so why don’t we call them that from now on?

You can pick up bands for relatively cheap, and they make bumping locks so much faster. Instead of having to manually reset the key after each attempt, the band resets the key for you.

It acts as a trampoline, of sorts, for your key. As you bump the key, it springs back into position, allowing you to bump faster, while applying consistent tension.

So how do you use the bands? Simple. You slide the key inside the ring.

How To Remove a Double Key Deadbolt: Step-by-Step

Aug 27, 2021 Contributed Learn Locksmithing Today
A double key deadbolt lock is a popular choice among homeowners. Unlike the single-cylinder option, you need a key to unlock the deadbolt from the inside or outside your home. It is an added security feature, ...

How To Remove a Deadbolt Lock That Has No Screws

Aug 18, 2021 Contributed Learn Locksmithing Today
When it’s time to replace a deadbolt, many homeowners wish they could remove it all by themselves. Unfortunately, some end up hiring a locksmith. The truth is that it’s a straightforward process and requires a few ...