Protecting Yourself with Video Evidence

In this modern world, it isn’t unfair to say that anybody who may find themselves alone with a random caller could protect themselves with video evidence. Not only can it deter people from attempting to physically assault you, but it can protect you from false allegations on any number of fronts. Without judgement, it is pretty safe to say that anything on tape is better for everyone, so let’s take this time to first summarize a few of the things that you’re protecting yourself from, and then discuss how to go about that, without coming across as paranoid.

There are a few things that people could claim false allegations on. That you destroyed their property, stole their property, molested them. Any of these is a potential risk area. Why? When the person who is making the false claims contacts the police, what are they going to be looking for? An alibi. Your alibi? You were there, but you didn’t do it. That is the classic “your word against their’s” and it doesn’t tend to work out very well for the accused. But if you can pull up a video of the entire time that you were with that person, you are protected.

The type of allegations doesn’t matter, either. The fact is, they make a claim, and you have the video evidence to refute that claim. The fact that you will be recording will tend to stop false allegations before they start, anyway.

This is pretty much covered above, but I wanted to touch on it here, because it’s less focused on you personally, but on your business. You will sometimes receive calls by people who need help, and then a while later, receive an insurance claim from these people stating that you damaged their property while performing your duties. Depending on what they are claiming, your video may be able to be used to dispute these claims.

Let’s face it: We are legal cat burglars. Because of this, we are constantly at risk of people attempting to use our skills to bypass locks that they do not have the rights to. We have means to protect ourselves from these types of people, but even those aren’t foolproof. So in the event that one slips by you, it is always nice to have a good identifying video of the culprit to provide the police when they come to call. It also helps that you will then be able to show the police that you went through all the proper procedures, and those procedures were simply defeated.

The process is pretty simple, and passive.

Four steps to protect you from any potential false allegations, or criminal activity. Simple, right?

Get The Right Equipment

Now, what makes up the right equipment is largely up to you. The right equipment in this context is any equipment that will capture video footage, without breaks, and last for the entire time that you are working. Your best option would be to pick up a police body camera, since they are trusted by law enforcement, and have a reputation for working properly. Beyond that, they’re cheaper than a GoPro.

If you simply can’t afford it, you can always pick up a cheap GoPro knock-off, but you’re going to deal with worse quality, and shorter battery spans. I suggest just springing for the police body camera, because it will protect you better in the long term.

Turn it On Before and Off After

Much like a weapon, the right body camera is the one that you will use, and use properly. For best protection, you should turn the camera on when you leave your business, and leave it on until you return. This should give you enough footage where there will be no question about your innocence to any false allegations. Traditional investigation techniques can be used after to help with any potential follow up issues.

Now, it makes no sense to gather this footage and then delete it. That’s like walking around with a pistol on your belt, and having it only loaded with blanks. Sure, you might deter some people, but the ones that you don’t deter are the ones that are going to push you as hard as they can. Which means they’re also the ones you’re going to need that footage to disprove. It isn’t beyond some of the crazy people in this world to destroy their own house in the hopes that you will have to pay them a large insurance claim. Footage of your entire time on their property will save you from that fate, with the added benefit of them having a destroyed house with no money to fix it.

Yes, and no. The above should be good enough day-to-day, but if you want to go further there are always ways to do that. You can increase the effectiveness of your video evidence by investing in a proper dashboard camera that runs off your car’s power. If you can find one which allows for external storage devices to be connected to it, even better. You will be able to record while at the same time backing that up to your permanent storage.

Beyond that, do your job well and consistently, and you will eventually build yourself a reputation. A locksmith’s reputation can be as good as a video in certain crowds. Especially with law enforcement. If you have a track record with your local law enforcement as being a top quality, meticulous, and safe locksmith, than they will question any person that comes to them telling them the contrary. This may not be enough to stop them from following through on their investigation, but it should be enough to give you the benefit of the doubt. And when false allegations are in the mix, that benefit could be all it takes to save you. 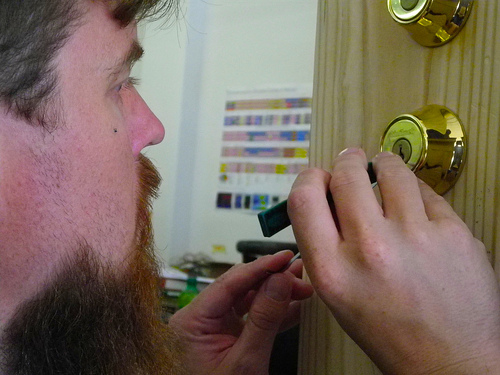 Locksport: Good for Locksmiths, and the Industry

Aug 22, 2018 Travis Blog, Industry, Locksport
Locksport is the name given to a sub-culture of lockpicking enthusiasts that pick locks for, well, sport. Locksport. Now that we have that out of the way, let's dive in to the deeper bits. ...